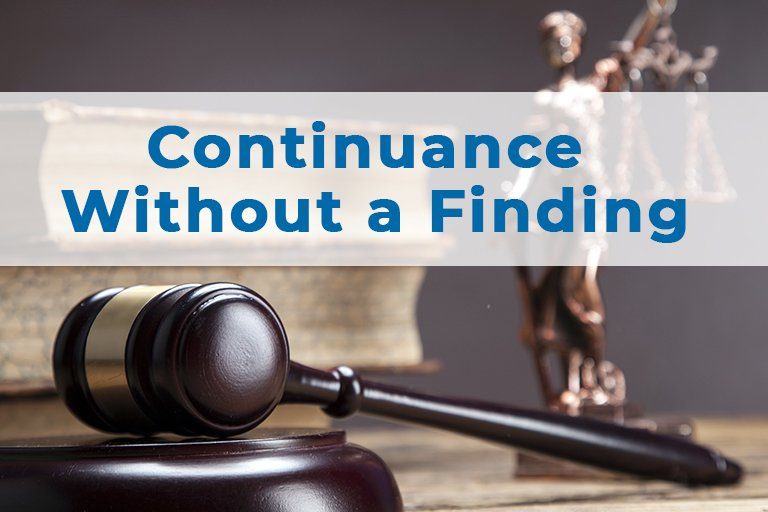 Under Massachusetts Criminal Law, a Continuance Without a Finding, or a CWOF as it’s known, is a form of pretrial disposition that is short of pleading guilty, but involves an admission to sufficient facts to support a finding of guilty.  This means you acknowledge the Commonwealth has gathered enough facts and evidence to support a guilty verdict by a judge or jury.  As such, you admit there are sufficient facts to find you guilty of the charge(s), but you are not actually found guilty to the offense.  Instead, the case is continued without entering a guilty finding for a designated period of time.

There are various benefits and potential drawbacks to consider with a CWOF.  Your case will only be continued without a finding under certain conditions, which almost always include a period of probation for the duration of the CWOF period.  Such periods typically range between 6 and 24 months.  During the CWOF period,

If you violate the terms of the CWOF during that time, the continuance will be vacated, and you will be convicted of the underlying offense without any right to a trial.

Complying with the CWOF

If you comply with all the requirements, the CWOF will be closed, and the matter with will be dismissed without a finding of either guilt or innocence.  As such, a closed CWOF that is then marked dismissed, is not a conviction on your record.  However, during the period of continuance, the charge will show as being continued on your public CORI (Criminal Offender Record Information).  Once the CWOF is successfully disposed of, it will automatically clear from your CORI, as it not a conviction.  Therefore, a CWOF avoids a misdemeanor conviction, which would remain on your CORI for five years.

When can a CWOF help?

Being convicted of a crime can carry serious collateral consequences.  Therefore, a CWOF can help in situations where a finding of guilty would cause problems with one’s career or educational opportunities.  If a job application asks whether you’ve been convicted of a crime, you can honestly answer “no.”  Therefore, a CWOF (versus a guilty plea) can carry significant benefits when it comes to job opportunities, security clearances, the right to own firearms, eligibility for scholarships or financial aid.

However, in cases where employers seek information about the underlying arrest or charges (for example, jobs in law enforcement, government, or as a medical professional), a CWOF may be problematic.  If you are currently employed or plan to seek employment in such a field, speak with an attorney to decide whether it may be prudent to fight the charges at trial to obtain a not guilty verdict and dismissal.  Similarly, if your offense is one for which the federal government bans naturalization, or any term of probation would have a similar effect, a CWOF will not prevent your citizenship from being denied.

A CWOF will also not make any difference (versus a guilty plea) if you are found guilty of the same offense in the future.  It will stay on your record and will be used against you in the future if you are charged with a second offense, particularly with an OUI.  Furthermore, the Registry of Motor Vehicles treats a CWOF for a first-offense OUI as a conviction.

A CWOF is not a mere slap on the wrist and it can have future consequences, but it can often be a good outcome in many cases.  If you are facing a criminal charge in Massachusetts and want to know if you may be eligible to plead to a CWOF, call the Law Office of John L. Calcagni III, Inc. today at (508) 213-9113 for a free consultation.   We have a proven track record, spanning more than a decade, of obtaining favorable sentencing outcomes throughout the Commonwealth of Massachusetts.  Let us help you!