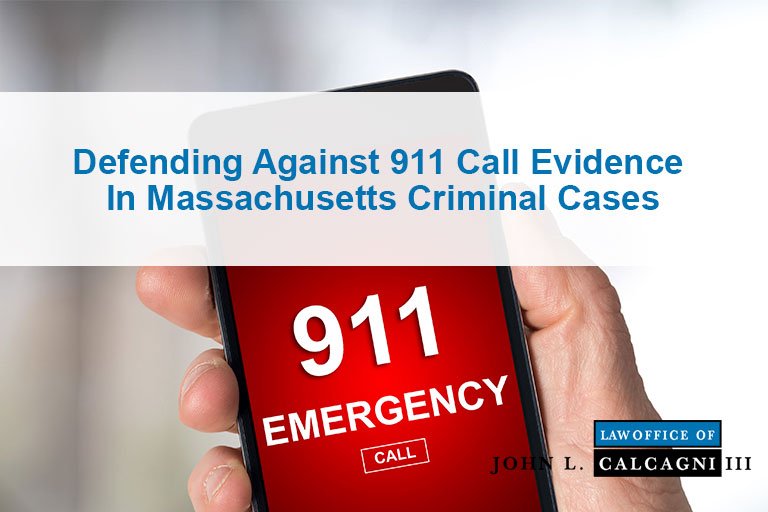 When a person faces an emergency situation, or believes a crime is being committed, one of the most common things to do is to dial 9-1-1.  9-1-1 is an emergency telephone system that exists all throughout the United States, and in certain locations in both Canada and Mexico.  Once the call is made, it is forwarded to a 9-1-1 dispatcher who answers the call, obtains information related to the situation, and directs emergency responders such as police, fire, or rescue to the caller’s physical location.

9-1-1 calls are all recorded.  This means the substance of the conversation between the 9-1-1 caller and the 9-1-1 dispatcher is captured on tape.  In many criminal cases, prosecutors almost always seek out 9-1-1 call recordings, where possible, and provide copies of the recordings to the defense during pretrial discovery.  For those cases that actually proceed to trial, prosecutors often seek to admit the calls into evidence and play the recordings for judges and juries.  This occurs in circumstances where the 9-1-1 dispatcher is available to testify, as well as in other instances where the caller is unavailable.

The use of 9-1-1 call recordings, where the caller is the complaining witness or victim in a criminal case, has sparked much debate and litigation amongst criminal law practitioners.  Legal arguments against the trial admissibility of the recordings is that they capture hearsay, defined as out-of-court statements offered for their truth, and that introduction of the recordings, which capture statements by unavailable witnesses, violates the right to confrontation guaranteed by the 6th Amendment to the U.S. Constitution.

A legal argument in favor of introducing the calls are that they capture excited utterances, a well-known exception to the general rule against admitting hearsay, and also that the recordings do not violate the confrontation clause because their purpose is to respond to an ongoing emergency, not record testimony for use in a subsequent judicial proceeding.

The admissibility of 9-1-1 calls recordings, for attorneys and judges, involves a two-part analysis.  First, is the call recording admissible under the applicable rules of evidence.  Second, would admitting the recording violate a criminal defendant’s constitutional right to confrontation.  If the proposed call recording fails to meet either part of the analysis, it is deemed in admissible.   Alternatively, if the recording both complies with the rules of evidence and does not violate the 6th Amendment, it may be admitted as trial evidence, even over any objections by the defendant.

The rules of evidence govern what information a judge or jury may learn and consider at a trial.  Hearsay is a statement made by a person out of court and offered for its truth.   As a general rule of evidence, hearsay statements are inadmissible in criminal trials.  However, the rules of evidence recognize several exceptions to this rule where under circumstances, although hearsay, a statement may still be admissible if it otherwise deemed to be reliable.

The hearsay exception relied upon by prosecutors to admit 9-1-1 calls into evidence at trial is the “excited utterance” exception.  A statement meets the test for admissibility as an excited utterance if there was an event that was sufficiently startling to render inoperative the normal reflective thought processes of the observer, and if the declarant’s statement was a spontaneous reaction to the event and not the result of reflective thought.  Factors that courts consider when determining if a 9-1-1 recording qualifies as an excited utterance include: whether the statement was made in the same location as the startling event; the amount of time between the startling event and the statement; and the age, spontaneity, and degree of excitement of the declarant.  Each 9-1-1 call recording must be listened to and analyzed individually to determine if the call qualified for admissibility as an excited utterance

The 6th Amendment to the U.S. Constitution guarantees for all criminal defendants the right to confront, through cross-examination questions, their accusers, or those persons who may offer evidence and testimony against them at trial.  To determine whether admission of a 9-1-1 call recording violates a defendant’s constitutional right to confrontation, the Court must determine whether the statements contained in the call recording are testimonial.  To do this, the Court applies an objective primary purpose test to determine what a reasonable person would have ascribed to be the purpose of the statement.  Statements are considered nontestimonial when in response to questions objectively aimed to enable authorities to meet an ongoing emergency.  Alternatively, statements are testimonial when the circumstances objectively indicate that there was no ongoing emergency, and that the primary purpose of the questioning was to establish or prove past events potentially relevant to later criminal prosecution.

Factors the court looks to when determining whether the primary purpose of a questioning was aimed to meet an ongoing emergency include: whether the declarant was speaking about events as they were actually happening versus describing past events; whether any reasonable listener would recognize that the declarant was facing an ongoing emergency; whether what was asked and answered was, viewed objectively, necessary to resolve a present emergency, rather than simply to learn what had happened in the past, including whether it was necessary for police to know the identity of the alleged perpetrator; and the level of formality of the interview.

The most common circumstance where prosecutors seek to introduce 9-1-1 call recordings is during trials involving domestic violence or assault offenses.  In a criminal trial, the prosecution bears the heavy burden of proving a defendant’s guilt by proof and evidence beyond a reasonable doubt.  Many times, the complaining witness who called 9-1-1 to seek assistance and report a crime fails to show up for trial, even when subpoenaed, or if the witness shows, he or she often invokes some legal privilege to avoid testifying.  When this occurs, the prosecution may seek to proceed to trial solely on the basis of the 9-1-1 call recording.  If the call is deemed admissible, the prosecution is able to present the complainant’s allegations without even calling a witness and the defense is rendered defenseless, unable to cross-examine or confront the recording.  Therefore, litigating the admissibility of 9-1-1 call recordings becomes crucial to the success at trial under these circumstances.

To defend against the introduction of a 9-1-1 call into evidence a trial, a good defense lawyer must scrupulously analyze the call in detail, applying the tests and factors listed above.  A good lawyer should also file a written memorandum, outlining the applicable law as it applies to the facts related to the call, thereby providing a roadmap to the Court on how and why the call should be excluded.

Massachusetts Criminal Defense Attorney John L. Calcagni and his team have extensive experience dealing with this issue and have successfully defended cases at trial by excluding 9-1-1 call recordings.  If you have been charged with a crime in the Commonwealth of Massachusetts, contact the Law Office of John L. Calcagni III, Inc. today for a free consultation at (508) 213-9113.