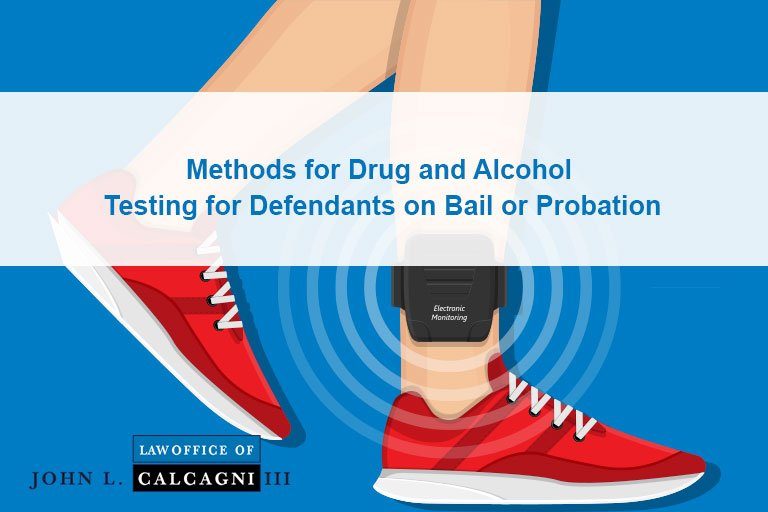 Drug and alcohol testing may take different forms, to include, being subject to:

These testing methods are used by courts and probation officers to monitor a defendant’s compliance with imposed bail or probation conditions.

When a defendant is subject to urine screens, the test is typically administered at the Probation Department in the court where the defendant is either on bail or probation.

If the court orders scheduled urine screens, the defendant must report to the Probation Department as scheduled to provide a urine sample.

If the court orders random drug screens, the defendant will be assigned a color (i.e. red, blue, or brown) and required to call the Probation Department each morning to determine if his color has been selected.

If the defendant’s color is selected, he or she must report to the Probation Department that day to participate in a urine test.

Whether urine testing is scheduled or random, when the defendant reports, he or she must submit a urine sample under the supervision of a Probation Officer, which is tested on site that same day.

Failing to report for a test

If the defendant either fails to report for a test, as directed, or provides a urine sample yields positive results for the presence of drugs, he or she may be charged with violating the terms of his bail or probation.

Another form of drug testing is the sweat patch drug testing system, which is designed to be worn for seven days and tests for the five common drugs of abuse (marijuana or THC, cocaine, opiates, amphetamines, methamphetamines, and PCP).

The sweat patch drug test consists of a collector pad held in place on a defendant’s skin by a strong adhesive film.

If the defendant uses drugs while wearing the patch, a small portion of the drug and/or drug metabolite is excreted in the defendant’s sweat and absorbed by collector pad.

The sweat patch drug test provides continuous monitoring for the entire time the patch is worn.  It is also water-resistant, so it stays on during showers and swimming.

Defendants required to wear patches are often monitored by a probation officer to see if the patch yields positive results for unlawful drug use, as well as to change the expired patch for a new one periodically.

The most common form of alcohol testing is the use of a breathalyzer or SCRAM device.  These alcohol tests measure how much alcohol is in the defendant’s blood by analyzing his or her breath.

This number is known as chemical breath analysis in order to determine blood alcohol content (BAC).

The traditional breathalyzer test, which is most commonly used by law enforcement to determine if a motorist is operating a motor vehicle under the influence of alcohol, is used by the Probation Department.

A SCRAM device is a portable breathalyzer device that a defendant is ordered by the court to take home.  Typically, the defendant will be ordered to blow into this device at certain times throughout the day to ensure he has not consumed any alcohol.

This device also comes with a charger.  It is the defendant’s responsibility to ensure the device is charged, maintained, and used as prescribed throughout the day to test his or her blood alcohol content.

Failure to comply with drug and alcohol testing

Failure to comply with drug and alcohol testing may result in a bail or probation violation, which can result in incarceration.  Therefore, it is important that a defendant strictly abide by these conditions when imposed.

If you have been charged with a crime in Massachusetts and are facing a bail or probation violation related to drug and/or alcohol testing or would like to file a motion with the court to remove these conditions, contact the Law Office of John L. Calcagni, III today for a free consultation or call (508) 213-9113.