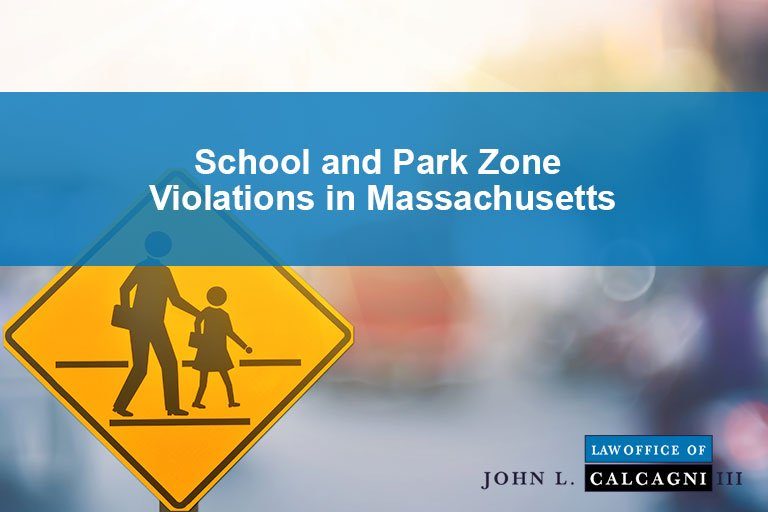 When a criminal defendant in Massachusetts is charged with distributing or trafficking drugs, and the offense is allegedly committed within 300 feet of a public or private accredited preschool, head start facility, elementary, vocational, or secondary school between the hours of 5:00 AM and 12:00 AM, or within 100 feet of a public park or playground, he or she may be charged with the separate offense of a Drug Violation Near a School or Drug Violation in a Park Zone in violation of M.G.L. c. 94C, § 32J.

The statute is designed to protect children from the harmful impact of drug dealing and to keep them safe from drugs by creating safety zones where they may be present.  Convicted offenders are subject to a 2-year mandatory minimum jail sentence.

The law school and park zone violations has evolved over time.  One example is in 2012 when the law changed to reduce the radius of the school or park zone from 1,000 feet to 300 feet.  This change was designed to address the unfair impact the statute was having on urban populations.

Most recently, in December 2020, the Massachusetts Supreme Judicial Court (SJC) decided Commonwealth v. Boger, which reversed a conviction where a defendant was found guilty of distributing cocaine within 100 feet of a park.

The SJC concluded that the Commonwealth failed to demonstrate that the area where the cocaine was distributed was either owned or maintained by a governmental entity, and therefore, it failed to prove the area was a public park.

The SJC further concluded that “…by placing the modifier ‘public’ before the term ‘park’ in the law, M.G.L. c. 94C, § 32J, the legislature intended that a public park be a tract of land that is (1) set apart or dedicated for public enjoyment or recreational use and (2) owned and maintained by a governmental entity…”

The legal definitions of school, park, and playground, as are also constantly changing for purpose of school and park zone violations.  Another case decided by the SJC in December 2020, Commonwealth v. Ramos-Cabrera, affirmed a defendant’s conviction for distributing heroin within 100 feet of a public park.

At trial, an employee from the city’s parks and recreation department described the park as “frightful, basically blight.”  She further testified that in the late 1990’s, the Department of Environmental Protection declared that no activities were to be held there because the soil was contaminated.

The defendant argued that because the park was not maintained and its soil was contaminated, that it was not considered a public park.  The SJC disagreed, concluding that there is no legal requirement that an area be maintained to constitute a park under the statute.

The first line of defense is to attack the evidence (or lack of evidence) in support of the underlying drug transaction.  If the drug transaction cannot be proven, there can be no school or park zone violation.

The second line of defense, using the services of an investigator, is measure the straight-line distance of where the drug transaction allegedly occurred, and the school or park alleged as the basis for the violation.

If the distance does not equate to the requirements of the statute, the violation cannot be proven.

A third line of defense is to carefully review any changes in the law to determine if the location of the alleged transaction meets the current definitions of school, park, and playground.

If you are charged with distributing or selling drugs near a school or park zone, and contact Massachusetts Drug Defense Lawyer John L. Calcagni III today for a free consultation at (508) 213-9113 or Email.