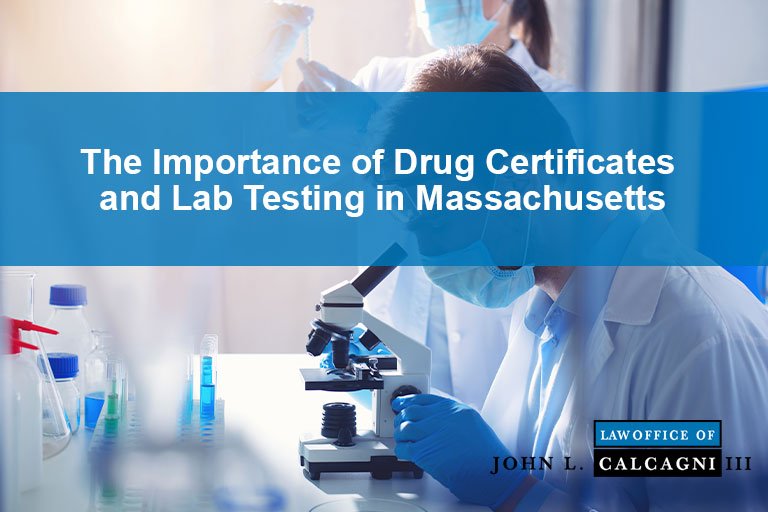 When a criminal defendant is charged with a crime in Massachusetts, he or she is entitled to evidence in support of the charges, known as discovery.  In accordance with Massachusetts Rule of Criminal Procedure 14, Massachusetts follows automatic, mandatory discovery procedures.

The rule requires the prosecution to disclose to the defense, and permit the defense to discover, copy and inspect any materials that are relevant to the case and are in the possession, custody or control of the prosecutor, persons under the prosecutor’s direction and control, or persons who have participated in investigating or evaluating the case, such as police departments and law enforcement agencies.

If you have been charged with a drug offense in Massachusetts, call John L. Calcagni, III today at (508) 213-9113 for a free consultation.

In criminal drug cases, the defense should always seek discovery materials related to the testing of the seized drug(s) from the laboratory, to include the drug certification and the lab file folder.

It is required by Massachusetts law, except with marijuana, that the prosecution scientifically prove at trial that the substance seized is the drug alleged by the criminal complaint or indictment.

When suspected drug evidence is seized by police, it is usually submitted a field test to determine that it is a controlled substance.  Field tests have limited reliability and are not nearly as precise as laboratory testing.

For this reason, field tests are not deemed reliable enough to be admitted as evidence in a criminal trial.  Laboratory testing, coupled with testimony from a chemist or other laboratory expert is required.

In 2011, the Supreme Judicial Court in Massachusetts decided the landmark case of Commonwealth v. Luis Melendez-Diaz, 460 Mass. 238 (2011).  This case determined that admission of drug certificates at trial without accompanying testimony of an analyst who had prepared them violated the 6th Amendment’s confrontation clause.

What this means is the defendant is entitled at trial to confront and cross-examine the lab technician who performed the drug analysis, to challenge the admissibility and/or reliability of the lab results.

The reason why it is so important to request and obtain these materials is that without the drugs, and accompanying testimony from a lab analyst, the Commonwealth cannot prove drug charges at trial.   The prosecution has the heavy burden of proving a defendant’s guilt at trial beyond a reasonable doubt.  Without this scientific proof as to the chemical composition of the suspected drug substance, the drug charge cannot survive legal scrutiny.

Another note of importance is that typically, when police seize a suspected drug substance during an investigation, they normally weigh it in its existing form, to include packaging material.

This is known as gross weight, and often differs significantly from the net weight calculated in a laboratory environment, where the packaging materials have been removed.  This becomes very important in Massachusetts drug cases.

Below is a chart listing cocaine and heroin trafficking charges by weight and applicable mandatory minimum terms of imprisonment if convicted.

The applicable mandatory minimum sentence for a drug trafficking charge in Massachusetts varies with the net weight of the substance charged.   When the alleged weight is close to a cut off for a particular amount trafficked, having the laboratory certificate is crucial, as the amount can mean the difference of years in prison for convicted offenders.  For example, assume the net weight of heroin is 102 grams.

Filing a Motion to Have the Substance Reweighed

In circumstances where the quantity is close to the line between two sections of the drug trafficking statute, defense attorneys should consider filing a motion to have the substance reweighed and even retaining a defense expert to be present for the reweighing.

This will serve as a check and balance on the laboratory weighing process.   Depending upon the nature of case, the defense may also wish to do the same for retesting the alleged drug evidence.

If you have been charged with a drug offense in the Commonwealth of Massachusetts, call the Top Rated Drug Lawyer John L. Calcagni III today for a free consultation.  Attorney Calcagni and his team have extensive experience handling all levels of drug charges throughout Massachusetts.  Contact us at (508) 213-9113 or send us a message.