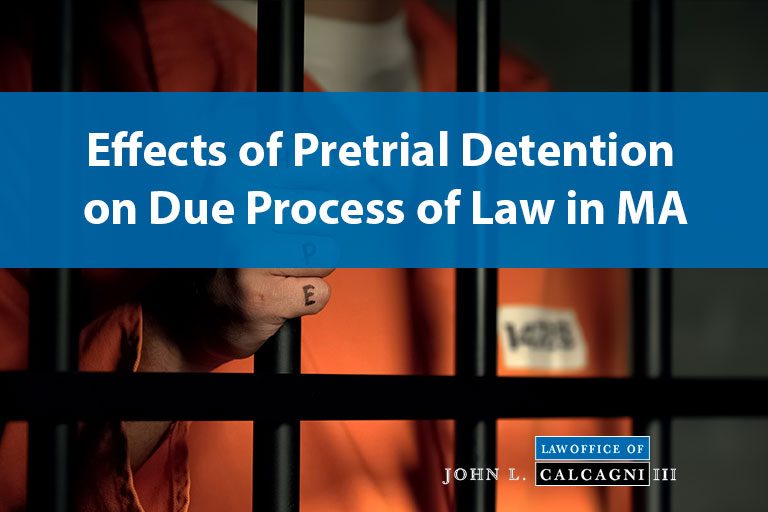 Since the COVID-19 pandemic hit the United States, there have been many criminal defendants who have been held in pretrial detention for prolonged periods of time because they either cannot afford to post bail, or are held without bail on grounds of dangerousness.

This is in part because of the backlog that COVID-19 has caused in the jury trial process.  Jury trials across the Commonwealth were suspended for over one year due to the virus.

The Supreme Judicial Court (SJC) issued several orders limiting in-person access to the courthouses to protect the health, welfare, and safety of the community and participants in the court system.  In fact, most scheduled events proceeded virtually during this period of time.

In June 2020, the prolonged detention of many defendants and its effect on the due process was addressed in the matter of Commonwealth v. Lougee.

When the Lougee case was decided, the length of pretrial detention caused by the delay of jury trials due to the COVID-19 pandemic had not yet reached the point of causing due process concerns.

However, in May 2021, the SJC revisited its holding in Lougee when it issued its decision in the matter of Hakeem Mushwaalakbar v. Commonwealth.  Mushwaalakbar discusses how delays caused by the COVID-19 pandemic may now constitute a material change in circumstances, which is the legal standard that a defendant must satisfy to be successful in modifying bail terms and conditions.

Mushwaalakbar also provides a procedural framework, which allows defendants to file a motion to reconsider bail if held longer than the presumptive time period under the statute, and can make a preliminary showing of one or more of the following due process factors:

Due process imposes limits on pretrial detention because liberty is a fundamental right under the United States Constitution and Massachusetts Declaration of Rights.

Pretrial detention is constitutional because it is temporary and provisional, and trial provides an inevitable endpoint to the prosecution’s authority.  The prolonged length of delays caused by COVID-19, in some cases, has upset this careful balance and implicates constitutional concerns.

There is a delicate balance between the liberty interests of a defendant who is presumed innocent and concerns for public safety caused by high-risk defendants.

Pretrial detention is viewed as constitutionally lawful if it serves regulatory rather than punitive purposes, but at some point, pretrial detention may become excessively prolonged, and therefore punitive, resulting in a due process violation.

Filing a motion for reconsideration of bail

The appropriate way to raise due process concerns associated with prolonged pretrial detention is to file a motion for reconsideration of bail.  This motion should be presented before the judge who originally set the defendant’s bail terms and conditions since judges typically do not like overriding another judge’s original bail decision.  The judge will then determine whether the individual circumstances of the defendant warrant continued detention or release on bail.

If you, a family member or friend have been held in pretrial detention for a prolonged period of time in Massachusetts, whether because of the COVID-19 pandemic or for other reasons, and seek reconsideration of your bail, contact Massachusetts Criminal Defense Attorney John L. Calcagni, III and his experienced team today for a free consultation at (508) 213-9113